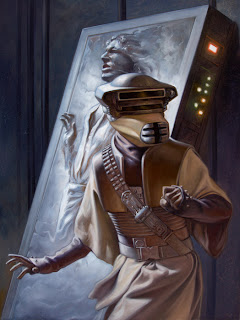 This was one of my favourite pieces in the book, though in general I wasn't as happy with the book as I thought I would be.

The clothing folds and the lighting are really wonderful!

Came out so good man...and if from what I saw one of the more successful illustrations in the book.

The detail and light on the mask is incredible. You really captured the moment and the suspense of this scene. Han's face is awesome. Looks as though in this painting you liked to really 'polish and smooth' things up. Such a beautiful painting! :D

Though I would most likely think in a different direction were I to be offered this project again today, I'm still really pleased with how it came out.swtor credits swtor credits