Some new (well, newly released) Magic pieces to share today! Though the shock land was likely to be the most popular of the pieces (for card mechanic/playability reasons, not necessarily art related), I think that little guy on the end stole the show. Actually, I feel there isn't much higher a compliment that a Magic artist can be payed than to have their art used on a particularly weak card and yet have people still enjoy it. I don't know who invented the name "Fblthp", but well done. 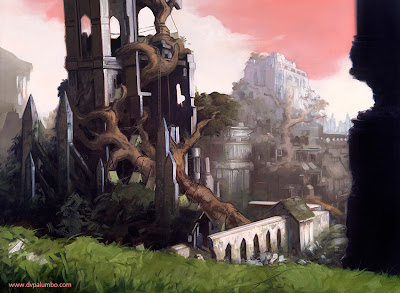 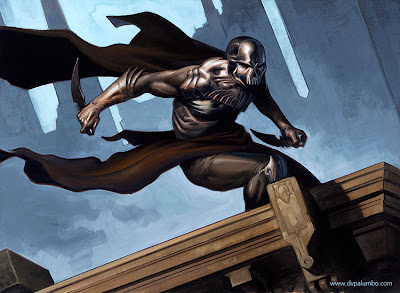 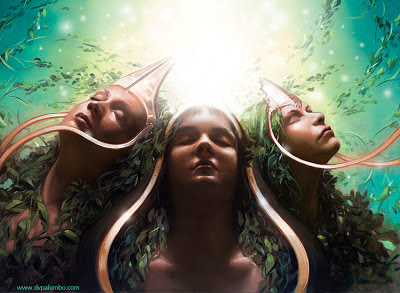 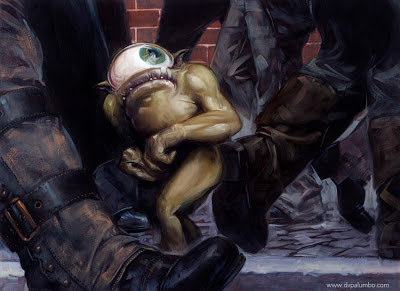 A quick update today with a personal piece which I started last year and just found the time to finish. Having fun finding mood through color and value relationships. 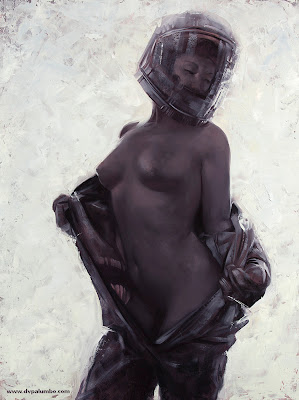 Today's post is a big one. I'm extremely pleased and proud to make public the series of illustrations which I created for the 30th anniversary Centipede Press edition of Tim Powers' brilliant novel The Anubis Gates. What follows are eleven interior plates, along with a set of images to be used on the cover. The cover images are going to be stacked on top of each other and framed by design elements (resembling an ornate 19th century frame) and printed as a linticular image which changes as you tilt the book. I've done my best to represent that with a gif. Though these are all listed as oil on panel, a few have some very minor digital touches as well. And so without further description: 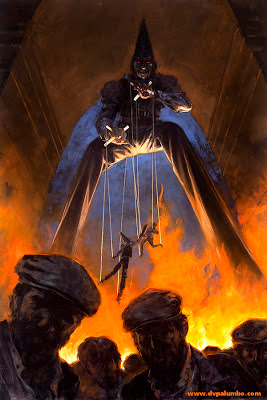 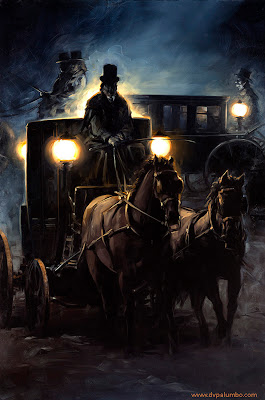 “Two Broughams, each with two horses harnessed to it, had been drawn up to within a few yards of the trailer, and by the light of the flickering coach lamps Doyle could see that the vehicles, like the period clothes they were all wearing, were clean and in good repair but obviously not new”, 20x30, oil on panel, 2012 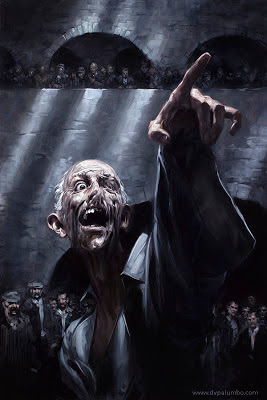 “Suddenly a burst of lunatic laughter erupted out of one of the flock of the shadow-huddling derelicts, and a thing that was evidently a very old man hopped with insect-like nimbleness into the light." 24x36, oil on panel, 2012 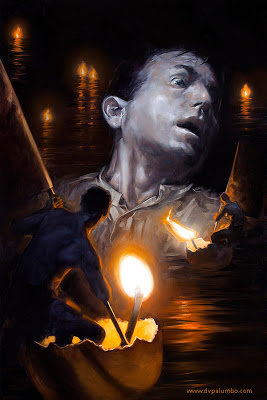 “For a moment he just hung stunned in the water, for the lights had followed him and now surrounded him, and staring at the nearest couple he saw that they were eggshell halves, equipped with tiny torches, straw masts and folded paper sails, and - it didn’t even occur to him to ascribe it to fever delirium - a tiny man no bigger than his little finger crouched in each one, twisting the toy mast deftly in the breeze to hold his diminutive craft in position.” 20x30, oil on panel, 2012 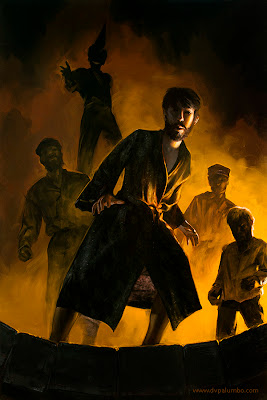 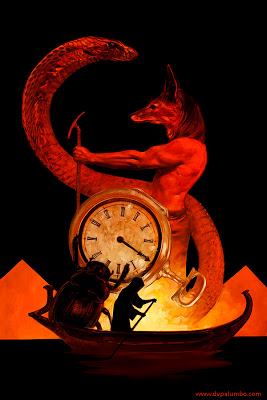 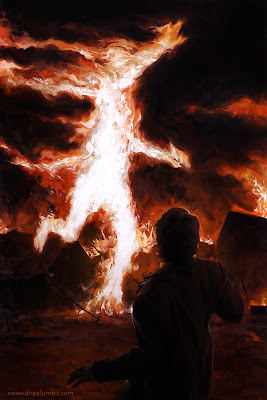 "Then his eyes were strained with trying to focus on what he was seeing, for unless he was somehow grossly misjudging the perspective, he’d just glimpsed two - and now a third! - completely burning men, each at least thirty feet tall, running and bounding energetically, even joyfully, across the grass between the tents and the road.” 20x30, oil on panel, 2012 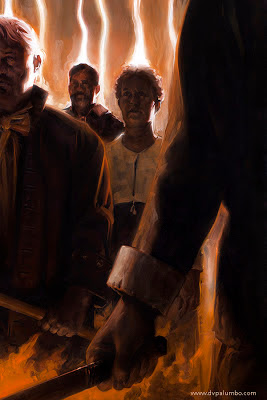 “Several of them drew swords and daggers, and the rest - including a couple of matronly ladies - picked up heavy, club-length pieces of lumber” 20x30, oil on panel, 2012 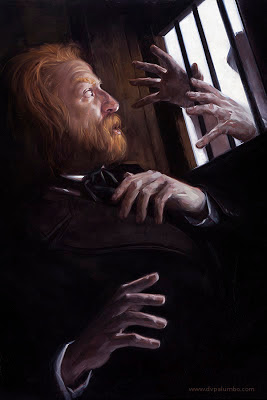 “Doyle had let go of the fog-wet bars, and now he actually stepped back, startled by the raw hatred blazing out of that eye.” 16x24, oil on panel, 2012 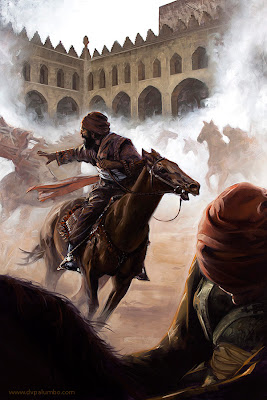 “The ranks of Mamelukes broke apart like a row of Japanese lanterns struck by fire hoses.” 20x30, oil on panel, 2012 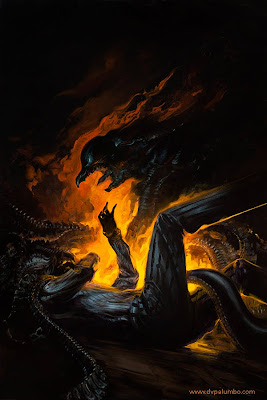 “Most of the light went out when Horrabin hit the floor, so that all Jacky could see was a heaving, tortured mass of dying shapes, and all she could hear was an ever-weaker chorus of gasps, crunchings, whimpers and long, rattling exhalations.” 20x30, oil on panel, 2012 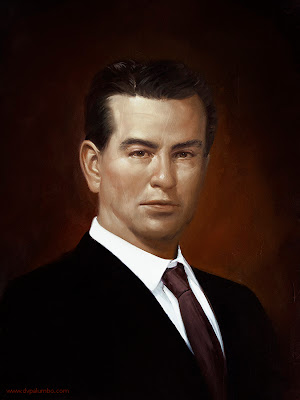 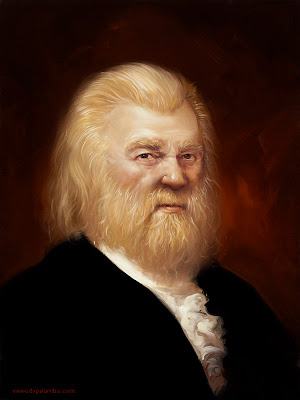 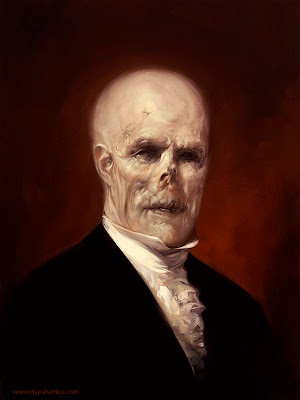