Amazingly, the tarot series is nearly finished! I believe I only have three more to do before my 19 are all in, and we're expecting all 78 pieces to be done by the end of the summer. This is my most recent, catching up on more Major Arcana with Strength (which I was very surprised to see had not yet been claimed!) 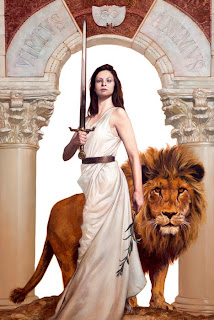 14x21, oil on illustration board

A few days ago I learned that I had received TWO medals in this year's (upcoming) Spectrum. I was awarded the Gold in the book category for Gods War and the Silver in the comic category for Sleep. Spectrum has come to be one of the two milestones of my creative year (the other being San Diego Comic Con) when I stop and assess where I've been and where I intend to go. It's a wonderful opportunity to reflect and a strong motivator to push further and explore, and I'm tremendously honored to have been selected for these awards. :D
Posted by David Palumbo at 8:27 PM

congratulations!! you definitely deserved it! =]

Very nice card! Love the dress folds and the lion. And the lady definitely has a very determined look on her face, and it takes strength to hold onto one's determination!

Once again, congrats on the spectrum awards!

Congratulations on your award wins - you definitely deserve them! And I love this piece. Can't wait to see the tarot deck as a whole, seeing a few pieces has been beautiful so far.

"Strength" is beautiful as well.
:)

I'm so thrilled for you and your awards. I saw the video of the awards at the selecting process and was so excited to hear you won! Congratulations! I can't wait to see your tarot deck... I will be buying it for sure. This one catches my eye every time I open my igoogle page with my collection of followed blogs. I'm really amazed at your care in the textures. From the thick rich lion's mane to the shadowed folds of the marble in the Corinthian capital.

You continue to inspire and amaze.