An interview with Scott Altmann

I'm running a day late on my end here, but I'll be sharing a booth in the upcoming New York Comic Con with fellow illustrator and very good friend Scott Altmann and he asked me the other day about doing an artist on artist interview for our blogs. You can find my answers to Scott's questions over on Scott's blog

And before I begin with my questions to Scott, I'll give a little intro just in case you may not be familiar with his name. In addition to numerous appearances in fantasy art anthologies such as Spectrum and Society of Illustrators, Scott has firmly established himself in the young adult book cover field working for heavies like Harper Collins, Random House, and Penguin to name just a few. He's painted Magic cards, done freelance concept art, is a founding member of Gorilla Artfare, shown in galleries across the US and in Europe, and was this years Chesley Award Winner for Best Paperback Cover Illustration.

You can find his work, contact info, and all that sort of thing at his website and blog:
ScottAltmann.com
Bad Dreams Good Nightmares 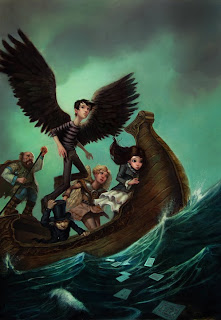 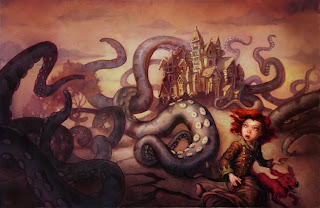 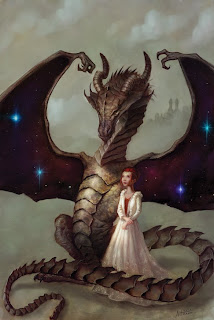 And now the interview:
I'll start things easy. Since isolated color is meaningless without context, what’s your favorite color scheme?

I don't think I have a favorite, as much as I go through phases. I am definitely coming off a "brown phase" where I was really preoccupied with cool tones over warm, earth tones. For instance, a cool gray over a raw umber tone. Lately, I have been really into grays, pinks, and cerulean blues.

As an illustrator who’s very prolific in the YA field, what were your favorite books when you were 12 and did the cover art have any influence over you?

I have to admit at 12, I put down the books a bit and I got really into Conan comics and Heavy Metal (the magazine - not the music). For some reason I never really got into superheroes, and my dad kind of realized that and he would bring me home these comics all the time. There was one book I constantly looked at from when I was even younger. I mention it , just because I kept revisiting it over and over and I still have it. It's called "Chinese Fairy Tales" and I believe it is out of print now: http://www.amazon.com/Chinese-Fairy-Tales-Marie-Ponsot/dp/B000RC0CK4
It has really beautiful illustrations on the interior as well by Serge Rizzato. I'll have to show you when I see you. I can't even remember the stories in the book, but some of the imagery really made an impression on me.

I also used to read a good deal of my dad's National Geographic mags, and they always had at least a few illustrations that were really cool to see.

Which painting of yours presented the greatest challenge to you while you were working on it? With the lessons that it taught you, is there anything that you would have done differently in retrospect?

Hmmm....that's hard to say. The recent Microvisions piece was tough because of the size 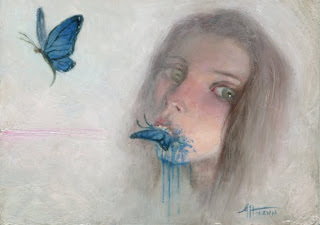 I was experimenting with a lot of palette knife work, which was really hard to do on the small 5" x 7" surface. I probably should have put away the palette knives, opted for less textural effects, and stuck with synthetics or sables.

The other painting that comes to mind, was a digital illustration I did for Random House and that was Chris Grabenstein's "The Hanging Hill".

The story was so great- Chris is such a skilled writer and this was my first job for Random House, so a lot of the challenges of this painting I put on myself were self-imposed pressures. Then when the art direction was to have a scary house, and NO FIGURES I panicked a bit. I had never done an illustration that the focus was on something that was something other than a human figure. How was I to make a house interesting enough for a cover?

I think I learned that I was placing too much emphasis on subject matter, and I should have focused more on compositional effects, picture dynamism, and narrative I figured that out in the long run, but I could have spared myself all the stress and anxiety!

As your professional career has been unfolding, what are your reactions to the direction that you’re moving in? Do you feel it would have surprised you as a younger artist, or has it all followed your early plans and goals?

I think I am eternally dissatisfied with my work and career, but not really in a negative way. That makes no sense when I say it out loud, but it has more to do with just always looking forward and looking to evolve. I have definitely moved into a market geared towards younger audiences, and it will probably keep going in that direction. Of course I get the urge to do more mature illustration once in awhile, but I feel this market plays to my strengths as an illustrator.

I'm honestly surprised by it all when I stop and think about it. I can't believe I get paid to do this as a living sometimes. My early goals and plans were either non-existent or vague , but now that I have goals and a decent momentum I'm excited and just want to keep pushing forward.

With your schedule full balancing illustration commissions and family life, do you ever find the time for personal painting these days? If so, what is it that matters to you most in doing them?

It's hard -I cannot lie. My days are packed from morning to night with various family/house/ illustration obligations so finding that time is a real struggle for me. . I've only gotten to sneak in a small painting here and there for myself.
There is a positive side though. Now that my illustration career has started to take shape, I feel I can now more clearly separate my job from my personal work. There's no more pressure for me to have gallery owners like it, or have it accepted by art buyers. Now it's really just for my own expression and experimentation . Just need more time to do it! 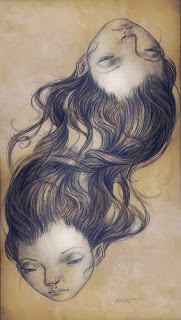 In terms of concept vs. technique, which is more likely to excite you in the work of another artist?

I think it's the synthesis of the two that really excites me. When an artist combines these elements in harmony it can really be powerful.

What sort of things do you feel you absorb most from other artists that ends up later in your own work?

It's definitely technical things I admire . Whether it is edgework, atmospheric perspective, or shape arrangement - I try to learn from people who are doing things better than I am. As far as narrative and concepts, that is more personal for me.

What is the one aspect to picture making which you find the most exciting to you right now?

I'm definitely feeling a renewed interest in composition , but not only arrangement of shapes but also arranging values. I think once you get a solid grasp of the basics, it opens it up to unlimited possibilities. Yes - a light figure against a dark background is very effective, but a light figure against a light background can be even more powerful if skillfully done.

Be sure to come visit us at the NYCC, we'll be at booth number 528 with originals, prints, books, DVDs, and awkward conversation ;)
Posted by David Palumbo at 9:40 AM

Email ThisBlogThis!Share to TwitterShare to FacebookShare to Pinterest
Labels: miscellaneous

Great Interview! This was a neat idea- to swap interviewer and interviewee roles. Good questions Dave.