The Adventures of Link

Here are two pieces I made for an upcoming show at OhNo!Doom in Chicago. The show is all video game related images, and for me that translates to NES classic. It was my first system, my favorite system, and the only console I still use (believe me, Tetris *never* gets old). The choice of which NES game to jump off from was tough at first, but in the end it had to be Zelda 2: The Adventures of Link. It was the first game I ever owned (besides Mario/Duck Hunt I suppose) and it was fuel for my imagination for years and years to follow.

This was also a fun project because it was my first experiment into combining fantasy art subject matter and ideas with the more painterly and naturalistic style which I've been exploring in my gallery work. I definitely will be doing work more along these lines in the future. 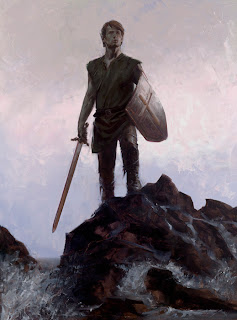 "Before him was a raging sea and, beyond it, the Ocean Palace", 18x24, oil on wood panel 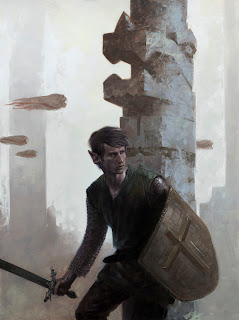 If you're in the Chicago area, check out the show! It opens February 11th at OhNo!Doom
Posted by David Palumbo at 2:51 PM

Wow, I really like this looser feel to your painting. Love these!

Wonderful Dave. The choise of color is sublime and the chharacter interpretation is interesting. I really like this "loose" and powerful
brush work too.How much time do you usually work on a piece like this? I mean sketching, finding references, preparing the board and painting. I thank you in advance

Francesco - The prep time on these is considerably longer than the execution time. Probably a week getting the idea solid and ready and then a couple days painting

I don't know. They look like photographs, not paintings.

ces - really? interesting. they're way brushier and painterly than my typical illustrations

Thanks Dave. For me too is like that and I wasn't sure it was normal. I prefer to start painting when the sketch is really solid and every references I need is found ^^

Dave - I think it may just be my graphics program. I can't seem to get any detail on them. They'd probably show up better in Photoshop, but them I'm probably the only person in the world who doesn't have it installed on my PC.

no, I think I know what you mean, I just think it's an interesting response. I'm trying to get a more naturalistic quality and part of that is working in less saturated color and being very particular in how I arrange my values and the overall value range. I'm also paying closer attention to the hard and soft detail of focal areas and peripheral information. In other words, trying to make the effect more life like and moody, which I could see might also give it a quality more photographic than my other illustration work, especially when seen small.

Yeah, I think it's the less saturated colour that makes it look more like a photograph to me - especially a B&W photo that someone has coloured. But I'm a colour person - the interesting part of any of my fibre arts is the colour - and nature is full of colour!

Thank you for the detailed response! It was very interesting, and now I have more to look for in yours, and others, paintings! It's always good to see an artist willing to try new things and paying attention to his paintings.

Wow, just discovered you through Kotaku, and you're a great artist. Brilliant work, very reminiscent of Frezetta!